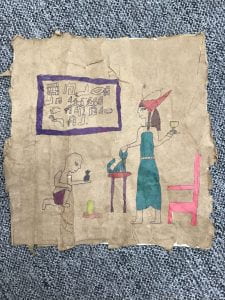 Pharaoh Elah looked out of her window at the approaching scribe coming to give her a gift, as the trees lazily waved to her from the Nile river. She studied him, but he was not carrying anything large or grand for her. Instead the scribe carried a small, black, leather pouch in one hand, and a large wooden cane in the other. He walked out of sight, to the palace doors. She knew because he came to her every single day, with his small leather pouch, full of the same thing, spices. She sat on her throne, while the only company she had, her soldiers, stood stiff as stones. A soldier came up to her and snapped her out of her thoughts.

“Pharaoh, your guest has arrived. May I open the doors?” He asked.

“Of course. Send him in.” Replied Elah. The tall doors swung open, welcoming the scribe.

“My Pharaoh, I have come to give you a gift.” He said in his quiet but sure voice. “Thank you Addai.” Said Elah. He stepped up and placed the bag in her hands, and stepped down. Before he left, he made a deep bow to her. Elah attempted to untie the bag, but it was tied securely.

“Sachihiro!” Called Elah. A long limbed, elegant black cat, almost blue, jumped into her lap and, with sharp fangs, opened the bag. He sneezed once he opened it, then curled into a ball, like an armadillo in her lap. That’s odd. Thought Elah. Usually Sachihiro wants to eat the spices. Maybe this is just a new type. Elah sighed. She trusted Sachihiro so much. He lived up to his name, extreme happiness. He was her best friend. She called over a soldier.

“Take these spices to the kitchen. I want them in my dinner please.” The soldier nodded.

“Yes Pharaoh.” Was all he said before he marched away. While Elah waited for dinner, she played with Sachihiro. She surprised him and made him jump up high, making her laugh.

“My Pharaoh, your dinner is ready.” said the same soldier as before.

“Thank you. I will be there soon.” Replied Elah graciously. She picked up Sachihiro, to his dislike, and walked over to the dining room. The table was full of delicacies, sweet honeycombs on a platter, and other delicious food. The main dish, a spicy and sweet bread, was a dish her new spices had been put into. She cut a small slice after she had sat down, and laid it on Sachihiro’s plate.

“Sachihiro! Time to eat!” She called. Sachihiro bounded over, tried to slow down, and skidded across the floor, stopping right as his food plate. He dug his muzzle into the bread and began to eat. After what seemed like only seconds, he stopped.

“Eat up Sachihiro. You still have food.” Urged Elah. Sachihiro refused. He sat down. Then he lay down. His breathing became labored, like a Saluki left in the heat.

“Called the doctor! Immediately!” Yelled Elah. Soldiers rushed away, yelling. Sachihiro wasn’t breathing. A doctor rushed in. He pushed on Sachihiro’s stomach. The half eaten bread chunks were vomited out. Sachihiro began to weakly breathe again. The doctor stood up and spoke.

“The bread was poisoned. What was new inside the recipe?” He asked. The chef looked shocked.

“The only new thing was the spices I was told to add.” He said. Elah was enraged.

“That lying scribe gave me poison, and my cat almost died because of it.” She hissed.

“Bring that scribe to me. Now!” Yelled Elah. Soldiers marched quickly away. Elah gently picked up Sachihiro. Now he will pay for what he has done to you. She thought. Sachihiro began to gently purring in her arms. No one will ever hurt you again. I promise. The soldiers returned, pushing the scribe along with a spear.

“ On your knees!” Ordered one soldier. The scribe was pushed down onto his knees.
“What do you have to say for yourself?” Asked Elah.

“You deserved every part of it. You are no Pharaoh that I will obey.” He spat.

“Take him away.” Said Elah. Sachihiro twined himself in between her legs. He looked up at her, his eyes like moons. She looked down.

“Don’t worry, you will always be with me.” She whispered to him.